Amazing, the View from the Top

For CINCH Team pro rodeo athletes, keeping the National Finals Rodeo dream alive is what it’s all about. And kicking off a new season means it’s time to hit the road and ride for a Top 15 spot in the PRCA/Ram World Standings. Success at such an elite level, however, doesn’t come cheap. It’s earned by a little bit of luck, a fair amount of talent and a whole lot of hard work. And, sometimes, hard knocks.

The CINCH Team knows more than a little something about hard work. While chipping away at the competition for the right to ride in Las Vegas is half the challenge, earning a gold belt buckle--as so many did in 2018--is another matter altogether. Winning six of the nine world titles up for grabs, along with three average titles, our gritty, determined competitors could arguably say the season-ending championship event was one for the record books.

The 2018 National Finals Rodeo (NFR) was also history in the making for our iconic brand, which brings the best there is in Western wear to professional cowboys and all lovers of Western lifestyle. For the first time ever CINCH was represented inside the famed Thomas & Mack Center arena. A national sponsor of the PRCA, we proudly outfitted our Team athletes in shirts designed with a CINCH sleeve logo.

There’s plenty of prize money on the table for those setting out on this summer’s PRCA rodeo trail, and as our endorsees go for the big wins, who’s earnings will send them to Vegas this December? While the final 2019 NFR lineup remains to be seen, here’s a snapshot of our rodeo stars who left it all in the dirt last year.

Who Topped the 2018 NFR Leaderboard? 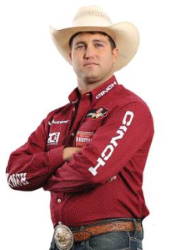 TYLER WAGUESPACK, Steer Wrestling
Nothing kicks off the NFR like an early Round 1 victory. Tyler Waguespack started strong and finished stronger by winning his second World Championship title; he claimed his first in 2016. Over the 10 days Waguespack banked $180,429, winning Rounds 1 and 8 and placing in five others. After winning Round 9, the ultimate victory was in reach. That’s a Las Vegas trip all cowboys hope for! The Gonzales, LA, cowboy closed out 2018 with a new wife, the average title with 44.5 seconds on 10 head and $260,013 for the year. It’s safe to say 2018 was a good one for Tyler! 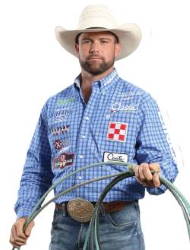 PAUL EAVES, Team Roping (Heeling)
Not only did Paul Eaves, Ionedell MO, and Clay Smith, Broken Bow OK, win the PRCA Team Roping World Championship and each a coveted gold buckle in 2018; the pair set a new, year-end earnings record with a major haul of $289,921. Although Smith and Eaves didn’t connect in Round 1, to claim the World Championship, they rebounded immediately winning Round 2. They placed in Round 3, won Round 5 and placed in four of the last five rounds. On the final steer of the pair’s four-year partnership Eaves closed the deal with the ultimate panty-hose heel shot for the overall win, earning each rider a whopping $174,577 in Vegas. Job well done. 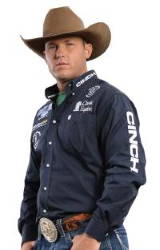 CALEB SMIDT, Tie-Down Roping
Caleb Smidt’s overall NFR average title helped this remarkable CINCH Team member claim his second World Championship. The average is one of the most difficult titles to win at the 10-round National Finals Rodeo, and he did it with 83.7 seconds on 10 head. That average win earned Smidt $67,269, propelling the Victoria, TX, resident and his talented partner “Pockets” to the 2018 gold buckle. (The pair teamed up to win their first in 2015.) Consistency was key for Smidt as his only round win of the 2018 Finals came in Round 1. Following that, he placed in four other rounds and finished the season with a handsome $232,817 in earnings. 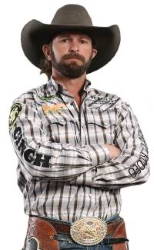 WADE SUNDELL, Saddle Bronc Rider
"Wild Man" Wade Sundell has had a World Championship title in his sights for many years, and we’re thrilled to see he accomplished this goal. 2018 had been trying for the Boxholm, IA, resident and his family as they endured the worst; losing their Oklahoma home to a fire. But when it came to the finals, Sundell chipped away at the leaders through all 10 rounds keeping his chin down and toes out. He placed in the first three rounds, won Round 5, placed in Round 6, split the win in Round 7 and placed in the last two rounds. He won $177,327, to propel him to his first gold buckle with $280,636 in earnings for the year. 2018 marked his 10th trip to the Thomas & Mack and although he and his family faced formidable challenges, together they have a new house and a World Champion buckle on the mantle. 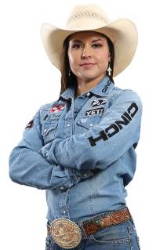 HAILEY KINSEL, Barrel Racer
Dreams really do come true! For Hailey Kinsel, Cotulla, TX, 2018 was the year to clinch her first WPRA World Champion title and a gold buckle during the ninth round of the NFR; and she did it in fine style. Kinsel and her palomino-powerhouse DM Sissy Hayday “Sister” brought the Thomas & Mack crowd to its feet by stopping the clock in 13.40 seconds to win the fourth round on the ninth night. With her gold buckle already in hand, Kinsel then switched to her 14-year-old gelding Thunder Stones “TJ” and cruised in Round 10. In 2017, Kinsel earned the new NFR record with 13.11 on the clock. In 2018, with an astonishing haul of $350,700, she surpassed the WPRA single-season recorded earnings number. 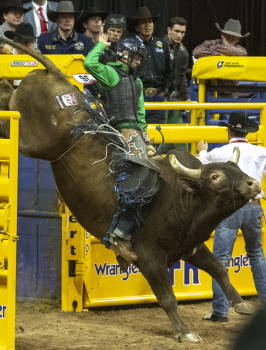 CHASE DOUGHERTY, Bull Rider
CINCH Team member and NFR newcomer, Chase Dougherty, claimed the RAM Top Gun Award; given to a competitor who wins the most money in the finals in one event. Dougherty hauled in $209,058 in bull riding over the 10 nights. He was more than $20,000 ahead of the next highest earner, steer wrestler Tyler Waguespack, with $180,429. As the winner, Dougherty was awarded a 2019 RAM 3500 Heavy Duty Truck, a RAM Top Gun-branded gun from Commemorative Firearms, and a custom Top Gun buckle from Montana Silversmiths. Dougherty took home the average title, riding seven out of 10 of his bulls and winning Rounds 7 and 8. He finished second in the world standings with a whopping $342,099.

2018 brought overwhelming success for CINCH Team members both inside and outside of the arena. During the remaining 3-month run-up to the 2019 NFR, we don’t expect these outstanding cowboys and cowgirls to be tapping the brakes any time soon! Be sure to keep an eye out for the CINCH sleeve logo as they enter this summer’s PRCA rodeos country-wide and in Canada.

To shop the latest on-trend Western wear and accessories, including the styles our world champions love to compete in, go to www.cinchjeans.com or visit your local Western retailer. For the latest CINCH news, happenings, and updates, explore our blog.

The National Finals Rodeo offering an annual prize purse to competitors worth over $10 million, is widely acknowledged as the world’s richest and most prestigious rodeo. Held annually since 1959 and often referred to as the Super Bowl of rodeo, the NFR showcases the very best cowboys, cowgirls, and livestock in the world. It’s simply an event not to be missed! This year, the NFR gets under way December 5 and runs through December 14. For more on this annual showstopper that provides edge-of-your-seat excitement, and to secure your tickets, go to www.nfrexperience.com.